The current December issue of the magazine Knižná revue, The Book Revue, contains a report from the International Poetry Festival Ars Poetica 2016. The article was written by Linda Nagyová. 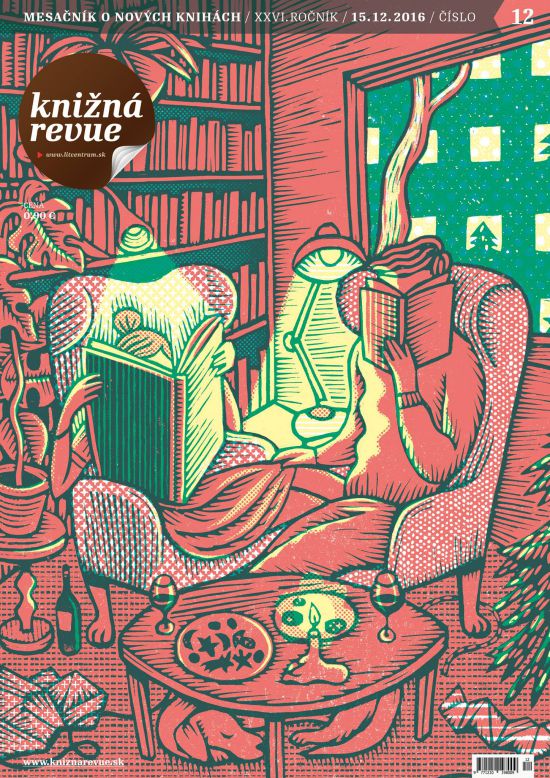 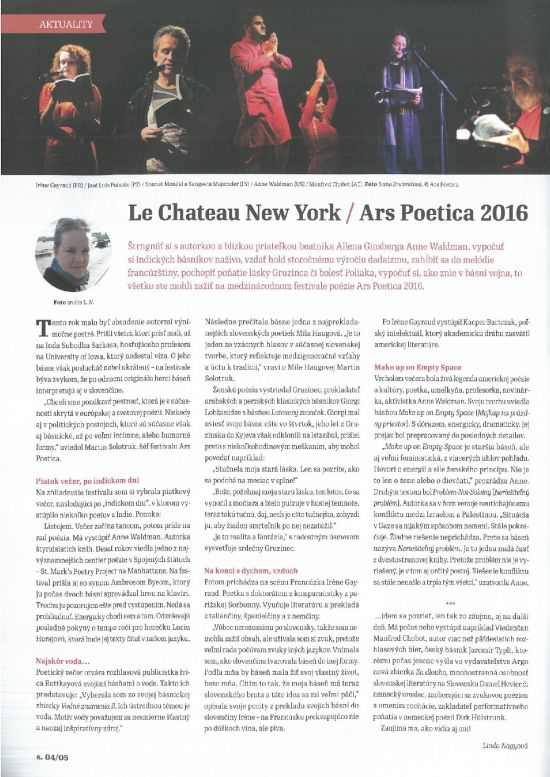 Clinking glasses with the author and Allen Ginsberg’s close friend Anne Waldman, hearing Indian poets live, paying respects to the hundredth anniversary of Dadaism, getting lost in the melody of the French language, understanding a Georgian approach to love or a Pole’s pain, hearing what war sounds like in a poem – one had a chance to experience all of this at the international poetry festival Ars Poetica 2016.

This year’s festival was supposed to particularly colourful, author-wise. Everybody managed to come, except for Subodh Sarkas from India, the hosting professor at the University of Iowa, who didn’t get visa. The audience, however, wasn’t deprived of his poetry – it is a tradition that after reading the original, actors reinterpret the poem in Slovak as well.

“We wanted to offer the whole colour palette that is currently present in the European and international poetry; sometimes hiding in political stances or taking a poetic, intimate and even humorous form,” said Martin Solotruk, the head of the Ars Poetica festival.

Friday night after an Indian day

I picked Friday night to visit the festival; a night following the “Indian day”, when a few Indian poets performed. What is on:

I am skipping through the pages. The evening starts with a dance number and then comes the poetry. Anne Waldman is supposed to perform. A writer of forty books. Leader of one of the most significant poetry centres in the United States – St. Mark’s Poetry Project in Manhattan – for 10 years. She brought along her son Ambrose Bye, who accompanied her on the piano for two poems. I watch her for a while before the performance, energetically pacing back and forth. The actress Lucia Hurajová is given the last instructions regarding reading speed for when she’ll be reading the texts in our language.

The poetry evening is opened by a radio publicist Ivica Ruttkayová and her poems with the motifs of water. She introduces them with the following words: “I was choosing from my poetry collection Water Signs II. Its central theme is water. I consider the motif of water to be an extremely happy and a truly inspirational source.”

Her performance was followed by a reading of the poems by one of the most translated Slovak poets, Mila Haugová. “It is one of the truly precious voices of the contemporary Slovak poetry, reflecting intergenerational relationships and respect towards traditions,” says Martin Solotruk about Mila Haugová.

Woman’s poetry was followed by Georgi Lobžanidze, a Georgian poet and translator of the classic Arabian and Persian poets, with the poem Lotus Bell. Giorgi was supposed to present his poems to the audience on Thursday, but his flight from Georgia to Kiev was rerouted to Istanbul, which caused him to arrive with a considerable delay. However, he was still able to say for example:

“My old love has grown fat. Just look at how it resembles a full moon!”

“O, God, bless my old love, the lotus flower, which emerged from the swamp and is pulsing in the thick darkness, pure whiteness now so fat; please, let it be even fatter, mutilate it, so that no mortal will ever desire it.”

“It’s a reality and a fantasy,” explains the hearty Georgian with a joyful smile.

Out of breath, air

Then the French Irène Gayraud comes to the scene. A poet with a doctorate in comparative literature at the Parisian Sorbonne. She teaches literature and translates from Italian, Spanish and German.

“I can’t understand any Slovak, so I couldn’t truly experience the content, but I very much enjoyed the sound, because I enjoy listening to the sound of other languages. I saw how the Slovak language moulded the poem into a different form. I think a poem should live its own life without me. I feel like my poem now has a Slovak brother and I like that idea very much,” Irène described her feelings about the translation of her poems into Slovak – surprisingly coming not after a few sips of wine (given that she’s French), but rather a few sips of beer.

Irène Gayraud was followed by a performance of Kacper Bartczak, a polish intellectual academically devoted to the study of American literature.

Make up on an Empty Space

The highlight of the evening was none other than the living legend of American poetry and culture, the poet, artist, professor, journalist and activist Anne Waldman. She introduced her works with a poem titled Make up on Empty Space, and she did so dramatically, with vigour and energy. Her oral presentation was thought-through to the very last detail.

“Make up on Empty Space is an older poem, but also a very feminist one from a few different perspectives. It speaks about the energy and the force of women’s principles. It is not just about a woman or a girl,” reveals Anne. The second text was Problem-Not-Solving. In it, the author examines the endless conflict between Israel and Palestine. “The situation in Gaza is not changing at all. It still goes on. There is no solution on the horizon. That is why I named the poem Problem-Not-Solving. It is a tiny part of a two-hundred-page book. As the problem is not yet solved, it also contains a certain attitude. We still haven’t found a solution to the problem and as a result of that, everybody is suffering,” concluded Anne.

… I come visit the festival on the next day as well, just out of pure interest. Various performances are to take place – for example Manfred Chobot from Vienna, an author of over 50 radio plays; the Czech poet Jaromír Typlt, who published a new collection Za dlouho in the Argo publishing house in fall; the multifaceted personality of Slovak literature, Daniel Hevier; or a German artist dealing with sound-related poetry and the art of declamation, the founder of performative interpretation in the German poetry, Dirk Hülstrunk.