The program includes concerts, theatre performances, encounters with poets accompanied by readings of original work, a seminar on the work and translations of Ivan Krasko, an art exhibition, lectures and discussions.

Bratislava, August 8 (TASR) – The multi-genre festival Capalest 2017 will once again offer a colorful international cultural program. Its 15th installment will take place between August 10 and 19 in different spaces located in the historical center of Banská Štiavnica and its surrounding towns.

"We are celebrating 15 years of the festival and in that time, we hosted 135 poets from 23 countries in Slovakia. Among them were not just young poets, but also true European or international stars. Michel de Maulne thought it up so that we can connect different European cultures through the French language. It offered us a chance to hear many never-before-heard compositions and see numerous Michel's productions," said Miroslava Vallová, director of the festival, at today's press conference in the Bratislava Literary Information Center (LIC).

According to the founder and art director of the festival, the Frenchc Michel de Maulne, the program will once again start off with a pre-festival concert invitation for the visitors from the region. In the section Capalest in the Region, they will get a chance to witness a four-member vocal group Capella Mariana specializing in presenting forgotten works of vocal polyphony. Their program is comprised of compositions by renaissance masters based on the motif of the collection of lyrical texts known as Song of the Songs. The concerts will take place between August 10 and 13 in Kremnica, Zvolen, Svätý Anton and Banská Štiavnica. 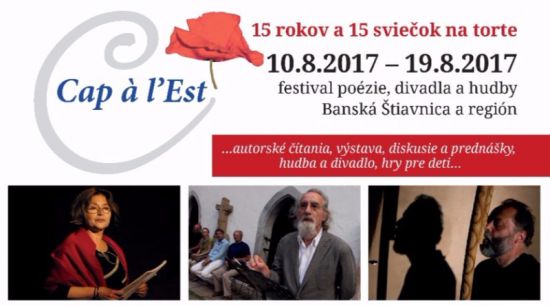 On Wednesday August 16th, the festival will commence with more stable parts of the program. In the afternoon, there will be a first French children's lesson from the cycle titled Capalest for Children, taking place in the Basic School of Art. We will have a chance to see concerts of the groups Quasars Ensemble, Solamente Naturali and the musicians from the Romathan theatre. At the old castle, the visitors of the staged reading can compare the work of Ivan Krasko to the work of French symbolists. In the program Seven Valleys, they will also be able to discover The Conference of the Birds, a 12th century Persian epic.

"It is a fascinating work by Farid Un-Din Attar. An extraordinary feat in world poetry; a very long poem; an epic in seven parts contained in a very thick book; a piece of the heritage of humanity. Last year it was published in French translation. The musical and textual performance will consist of a selection from Seven Valleys," said Maulne.

Book illustration and children's program will have their place as well. The festival traditionally gets engaged in discussions about current topics. Actress Emília Vášáryová, director Jan Antonín Pitínský, historian Bohumila Ferenčuhová, diplomat Pavol Demeš, publisher Petr Minařík and several other personalities will be debating on the milestone anniversary of the foundation of Czechoslovakia in the program titled A Hundred Years Together.

"We will welcome the founders of the festival as well as the most renown poets representing European national literatures. We will have the honor of welcoming editor of the Parisian Gallimard Publishing House Guy Goffette, Bulgarian poetess and laureate of the Prix Apollinaire Aksinia Mihailova, celebrated Portuguese poet Rui Cóias, Romanian writer Simona Popescu or Latvian poetess and translator Dagnija Dreika. Readings and discussions will also be held by Slovak authors such as Anton Hykisch, Ivan Štrpka, Ján Zambor, Mária Ferenčuhová, Mila Haugová, Dana Podracká, Rút Lichnerová and Eva Tomkuliaková," added Vallová.