Home > News > The power of authorial reading and its delicacies

The power of authorial reading and its delicacies

A Month of Authorial Reading, an international summer festival in Košice, is still going. Every day of the week, always starting at 6PM in LitPark on 2 Kukučínova St. (a branch of the Library for Youth in Košice), the organizers of the event are awaiting visitors and announcing that the reserves of literary delicacies from four countries haven't yet been depleted. Their abundant menu is available until August 3, 2017!

Delicacies of the visiting Georgia
The Georgian poetess Diana Anfimiadi said that the best way for two countries to get to know each other is through cuisine and art. The visitors of A Month of Authorial Reading festival in Košice witnessed it, having had the opportunity to get to know several exceptional authors. "Out of our Georgian guests, it was for example Lena Samniašvili, whose grandparents raised her to cherish literature and poetry and now she uses poetry to share her current feelings and moods, or Bata Danelia, one of the oldest representatives of Georgian poetry, whose wish was that the listeners like at least one of his poems. They loved all of them," says Iveta Hurná, the director of the Library for Youth in Košice. Apart from standard Georgian, some of the poetry was written in a dialect. "Through his work, Giorgi Arabuli is trying to keep the dialect alive. The biggest surprise to date was almost certainly Zaza Koškadze and his underground poetry."

Some of the local representatives at the festival
In the second half of the festival, the audience had a chance to equally enjoy great interviews with the finalists of Anasoft Litera, Silvester Lavrík and Ondrej Štefánik. "We also had the privilege of hosting the Lone Runners, Peter Repka and Ivan Štrpka." Another of their members, Ivan Laučík, is not with us anymore, but they remembered him through several citations. "The performance of a polish writer and amateur ornithologist, Stanislaw Lubiensky, was a nice change of pace. During the performance he even revealed the true identity of James Bond." Another thing that caught the audience's interest was the short story written by Oleksij Čupa (UA), Good bye, Lenin, which amused the audience in Košice while provoking a lively discussion among the audience in Ľvov. 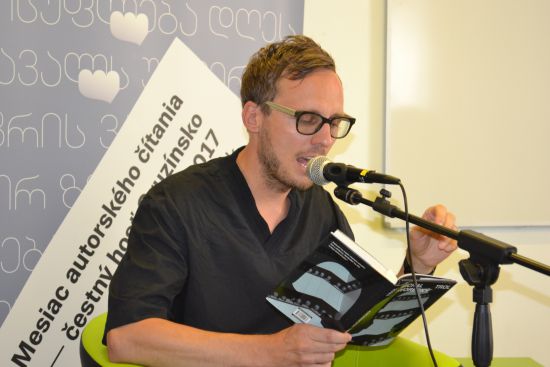 Also serving desserts
It may seem that the festival exhausted the list of good and even exceptional literates over the past twenty days. The truth is that enough remain for the festival to serve their audience another three delicious literary desserts. "If we haven't introduced enough authors from Poland so far, it is because three of them will still visit us by the end of the month," informs Iveta Hurná. "Writer, painter and theatre professional Zoška Papužanka, word virtuoso Przemek Witkowski and reporter searching for the identity of the post-soviet Georgia, Wojciech Górecki. Slovakia will be represented by holders of the Anasoft Litera Award, Peter Balko, Vladimír Balla and Monika Kompaníková, while Georgia will be represented by the founder of the first Georgian digital library Giorgi Kekelidze and one of the most talented authors of children's literature, Thea Thopuria. Out of the neighboring Czech Republic, we will host poet and literary historian Petr Hruška and musician and writer Erekle Deisadze."

Readings of A Month of Authorial Reading take place daily at 6PM in LitPark on 2 Kukučínova St. (a branch of the Library for Youth in Košice). "If you haven't yet gone to see it, I want to warmly invite you to do so. It is a good way to spend a summer evening and gain positive energy through literature."

A Month of Authorial Reading will host the Georgian poet Giorgi Lobžanidze, a participant at the International Poetry Festival Ars Poetica 2016.

More information about A Month of Authorial Reading can be found at:
www.autorskecitanie.sk/en
www.kosicekmk.sk