Home > News > The Most Respected Authors from Slovakia, Czech Republic, Ukraine, Poland and Georgia Have Finished

The Most Respected Authors from Slovakia, Czech Republic, Ukraine, Poland and Georgia Have Finished

The seventh annual Month of Authorial Reading 2017 (MAR) taking place in the Library of Youth in Košice ended on Thursday August 3. Through authorial readings and presentations of literary works, the festival managed to pass on many different life experiences, inner worlds of artists, basic human emotions and unfulfilled dreams.

31-day-long MAR marathon always leaves something unsaid or unread. That is why it always has something to offer, something previously unseen. Maybe that is one of the reasons why it's becoming more and more favored and successful year by year. The director of the Library of Youth in Košice, Iveta Hurná, on her experience with the festival, its course and its future development: "MAR has just completed its seventh year of existence. It had enough time to get into the public awareness of the citizens of Košice and our fans, as well as enough time to be able to boast with regular and considerable attendance." 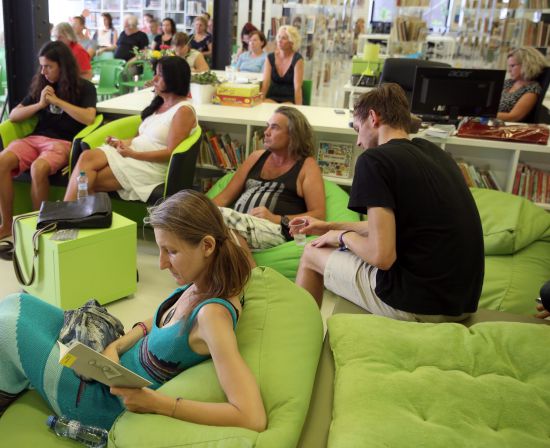 A Month of Authorial Reading 2017, Košice

The visitors love the festival
The festival has had positive feedback from both visitors and guests. "They like our flourishing city and they like our library LitPark. This year it has inspired many words of praise. Several authors have praised not just its modern and pleasant look, but also the smooth course of well-prepared readings. Words of praise always lift up the souls of all who work here and try to take care of everything without stopping, every single day of the week for the whole month."

Georgian poetry left everybody open-mouthed
When it comes to literary guests, the city Košice had a chance to witness the best of the best, on both the local and the foreign level. "Of course, the attendees were surprised and excited about authors from the Košice area, such as Juraj Briškár, Ján Gavura and Ľuboš Bendzák. On the other hand, as a country, Georgia charmed them not only by its harsh and heavy language possessing almost a mystical attraction, but also by charming, almost fairytale system of writing, which looks like it's been cut out of One Thousand and One Nights. We got to know naturalistic, essential poets, the majority of them introverted, who left everybody dumbfounded by their poetry, and we also got to know universally talented prose writers, all coming from Georgia. All differences aside, they had an air of maturity around them and they seemed much older than what their date of birth was suggesting."

The cherry on top of the festival
The festival finished on a high note with the help of two poets and musicians in one person, Petr Hruška and Erekle Deisadze. Petr Hruška had previously released seven collections of poetry. "The most recent one titled Přebytek otce (The Surplus of Father) was symbolically launched on our festival with his family by his side." The reasons were simple. The collection was published in Slovakia and the festival was probably the most suitable occasion for introducing it to lovers of poetry. The second guest, Erekle Deisadze, also came as a poet and a musician. His punk band, Za 40 kilometrov (In 40 Kilometers) mostly presents the author's political opinions. "There were even times when this author had to withdraw from the public eye and stay in hiding because of his opinions and his work."

Remnants of that which was experienced
Now that the festival's over, we only see remnants of that which was experienced and heard. "We still need to process much of it, we're still discovering new emotions that it provoked and we can't forget a lot of what we experienced." Maybe it is a result of how much was said about human unhappiness, wars, military conflicts, separatism and violence. "Many of our authors independently and relevantly pointed to the fact that we're living in an exceptionally lucky era, only we don't realize it and appreciate it. If I were to recap MAR in a complex way to finish things off, I feel as if this year's festival felt the shortest so far. Time flied past us through authorial readings and meetings between photographs of Tbilisi hanging on the walls in LitPark, and suddenly everything was over. The once-in-a-lifetime experience of being in touch with unique literature, unique people and their art remains hidden somewhere inside of us."

A Month of Authorial Reading Is Reaching Its Finale

The power of authorial reading and its delicacies