You have recently returned from Bratislava, from the Ars Poetica Festival. Would you please share with us your impressions while they are still fresh?

The poetry festival Ars Poetica in Bratislava is one of the most organized and welcoming international literary gatherings at which I was fortunate enough to participate. Various poetical profiles and participants from diverse geographical regions significantly contributed to the dynamics and heterogeneity prudently incorporated within the literary performance programme. The daily programme was generally wrapped up with a concert performance by indie artists, followed by an after-hours party, while discussions and networking were usually continued at the hotel bar and lasted till the early morning hours. So, all in all, this was an extremely pleasant professional and friendly experience.

In addition, as it turns out, Ars Poetica presents an important cultural event for the city of Bratislava, the fact best supported by the extensive media coverage of the event, including primetime TV news reports. The director, poet and academic, Martin Soloturk is a man with international experience. Namely, he was educated and lived in California for years, so, some of his proverbial American professionalism "leaked" – in the best conceivable way – into all the aspects of the festival. Likewise, our main "hostess", Martina Straková, a marketing expert, made sure that we all feel very accepted and welcomed. Last but not least, they also published a beautifully designed brochure, that is, a bilingual anthology of verses from all the participants. 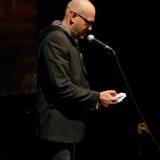 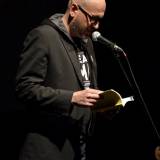 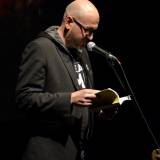 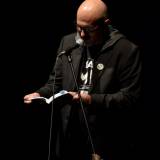 From which language backgrounds did the poets featured at this year’s festival originate? Was there someone who left a lasting impression on you?

This year's Ars Poetica hosted around two dozen artists, from China to the United States, along with the representatives from a dozen European countries, so it can be said that, over time, the festival has become a global, trans-European event. It seems to me that all the performances were interesting in their own way and technically well devised, so the audience – numerous, to say the least – can really feel satisfied. The most impressive audio-visual performance deserving of a special mention for creating an amazing sound collage is the performance by a German sound and spoken word artist Augusta Laar, accompanied by her husband Kalle Laar, the famous German avant-garde guitarist. I should also mention the Italian performer and long-time director of a poetry festival in Genoa, Claudio Pozzani and his confident on-stage riffing. Furthermore, the performances by the Chinese poet Zhao Si, the Spanish artist Maria Salgado, as well as the performance by the Dutch poet and artist Maria Barnas – whose short video work was also screened at the festival – left a lasting impression.

My "old" acquaintance, the English poet Harry Man (one of last year's laureates of the festival in Struga), Stanka Hrastelj from Slovenia, Michaël Vandebril from Belgium and Cristoph W. Bauer form Austria all held notable and well-attended readings. The dance performance, inspired by Chinese calligrams and performed by Jana Terekova, a Slovak who resides in Paris, also deserves a special mention. When it comes to musical events, the performance by the “ambient folk” trio led by the famous Slovak musician Zuzana Homolova was also noteworthy.

In addition to poetry readings, did the programme include reflections on poetry and things connected to it, such as publishing or translation?

Of course, the accompanying educational part of the programme was held at the Faculty of Philosophy, where our colleague from Cambridge, a poet and professor Rod Mengham gave a student lecture on the British interwar short stories. After this interesting event, under the auspices of the “European Poetry Forum”, a round table discussion was held on the issues of contemporary poetry and its place in the society. Stephan Delbos (USA), who teaches at the American University in Prague, our host Martin Soloturk, as well as the contemporary Polish poet (published in Croatia) Dariusz Tomasz Lebioda and Michaël Vandebril from Antwerp gave their notable contributions to the discussion.

Slovakia and Croatia are two practically neighbouring country with quite similar languages. However, it seems that our literary connections are not that great. What is the reason behind it and what can be done to change this?

Interestingly enough, a hundred years ago, we were a part of the same national framework and now we find ourselves back together with Slovakia and some other Slavic nations within the joint international geopolitical borders. Due to our cultural, historical and linguistic similarities, we should put more effort in the writers’ exchange programmes and intensify translating and publishing activities. This should primarily be achieved by collaborating on joint projects and events under the auspices of the EU and its accompanying funds. It might sound a bit too activist, but I’m afraid that there is no other way. Branko Čegec has already taken certain steps in this direction with his publishing house Meandra, collaborating with Peter Šulej, who is also a publisher.

This article has been published at: versopolis.com