On the first day in Ghent, the poets were invited to visit the Poëziecentrum. In this 'house of poetry' – which is actually a small castle – the authors were introduced to the literary activities of the centre, its unique collection of poetry, and the cultural field in Flanders and The Netherlands in general. Next, they explored the beautiful historical centre of Ghent during a city tour. The absolute highlights were the Medieval castle and prison 'Gravensteen'; the river Leie, romantically streaming through the small alleys; and the art nouveau 'Boekentoren' (Tower of Books') which preserves more than 46 km of books. 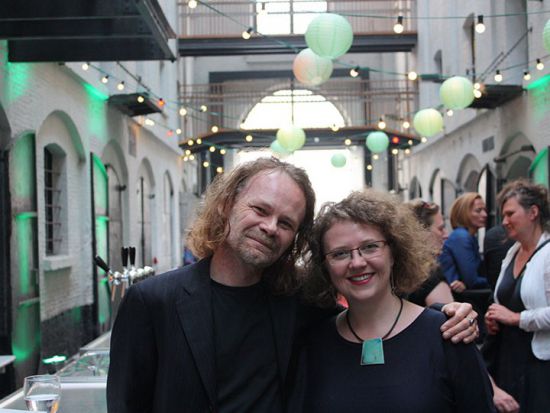 In the evening, the Versopolis poets had dinner with important literary and cultural ambassadors of Ghent. Amongst them were the Flemish Versopolis poet Tom van de Voorde, who represented Poëziecentrum at the Littfest Festival in Sweden; and Pim Cornelussen, the editor of Kluger Hans, one of the most prominent literary journals in Flanders and The Netherlands. The dinner was an excellent opportunity for the Versopolis authors to transcend the national borders and to build out an international network.

The next day, the five Versopolis poets went to Antwerp where the international literary festival 'Felix Poetry Festival' took place, a two-day-feast for the eyes, ears and minds (in collaboration with Poëziecentrum). The second evening of the festival was completely dedicated to the Versopolis project. Before their performance, the poets had a stimulating press- and expertmeeting, where they met important actors in the cultural and literary field in Flanders and The Netherlands.

After a short tour through Antwerp, the poets returned to the FelixPakhuis, where they prepared themselves for their performance, a reading from their own work in the original language. Stanka Hrastelj opened the splendid evening with her tender and beautiful poems for "Rupert". She was followed by Meirion Jordan whose unique poetry is inspired by his Welsh background. After a trendy musical intermezzo, Martin Solotruk astounded the public with his sophisticated work, which combines the author's socialist youth with the vividness of his grandparents' vineyards and a strong sense of the Slavonic Byzantine heritage. Next, Justyna Bargielska showed with great mastery the emptiness hidden behind the label 'feminine poetry' and proved in a very ironic and unconventional way what it means today when a poem is written by a young woman. Finally, Christopher Bauer closed the amazing evening with his striking re-interpretation of the poetry of the Latin author Catullus.

This article was published at versopolis.com, 16th June 2015.
More info also in Dutch at poeziecentrum.be