The contours of national identities melt so effortlessly when communication is sought on the human plane,
says SUKRITA PAUL KUMAR / thehindu.com, December 12, 2016.

When young, we used to hear of Urdu mushairas and kavi sammelans happening often here and there; Poems suitable for oral rendering in “trannum” or in rhyme were popular. Mushairas and kavi sammelans are organised today too but they are I believe much fewer in number. However, the good news is that, nowadays, poetry festivals are being organised within the country and also internationally in different parts of the world, not merely in exclusive “academic” hubs, universities, etc but in cultural and community centres that bring poets from different languages together in the local environs of say, Kisii in Kenya or Quang Ninh province in Vietnam or then Bratislava of Slovakia.

I had the good fortune of participating in a few of these festivals which offered poetry not available in English generally. In these festivals, sounds and varied rhythms of different languages generally fall gently upon the ears before their English rendering. The sound of the original sets the stage for the building of effective bridges to poetry in translation. 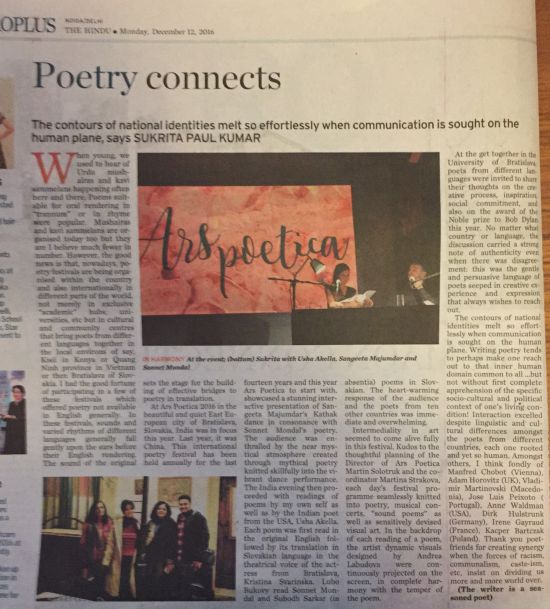 At Ars Poetica 2016 in the beautiful and quiet East European city of Bratislava, Slovakia, India was in focus this year. Last year, it was China. This international poetry festival has been held annually for the last fourteen years and this year Ars Poetica to start with, showcased a stunning interactive presentation of Sangeeta Majumdar’s Kathak dance in consonance with Sonnet Mondal’s poetry. The audience was enthralled by the near mystical atmosphere created through mythical poetry knitted skillfully into the vibrant dance performance. The India evening then proceeded with readings of poems by my own self as well as by the Indian poet from the USA, Usha Akella. Each poem was first read in the original English followed by its translation in Slovakian language in the theatrical voice of the actress from Bratislava, Kristina Svarinska. Lubo Bukovy read Sonnet Mondal and Subodh Sarkar (in absentia) poems in Slovakian. The heart-warming response of the audience and the poets from ten other countries was immediate and overwhelming.

Intermediality in art seemed to come alive fully in this festival. Kudos to the thoughtful planning of the Director of Ars Poetica Martin Solotruk and the coordinator Martina Strakova, each day’s festival programme seamlessly knitted into poetry, musical concerts, “sound poems” as well as sensitively devised visual art. In the backdrop of each reading of a poem, the artist dynamic visuals designed by Andrea Labudova were continuously projected on the screen, in complete harmony with the temper of the poem. 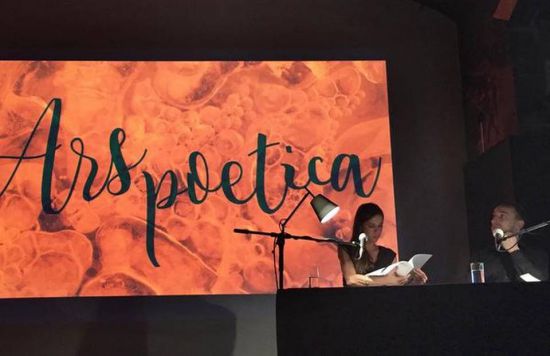 At the get together in the University of Bratislava, poets from different languages were invited to share their thoughts on the creative process, inspiration, social commitment, and also on the award of the Noble prize to Bob Dylan this year. No matter what country or language, the discussion carried a strong note of authenticity even when there was disagreement: this was the gentle and persuasive language of poets seeped in creative experience and expression that always wishes to reach out.

The contours of national identities melt so effortlessly when communication is sought on the human plane. Writing poetry tends to perhaps make one reach out to that inner human domain common to all …but not without first complete apprehension of the specific socio-cultural and political context of one’s living condition! Interaction excelled despite linguistic and cultural differences amongst the poets from different countries, each one rooted and yet so human. Amongst others, I think fondly of Manfred Chobot (Vienna), Adam Horovitz (UK), Vladimir Martinovski (Macedonia), Jose Luis Peixoto (Portugal), Anne Waldman (USA), Dirk Hulstrunk (Germany), Irene Gayraud (France), Kacper Bartczak (Poland). Thank you poet-friends for creating synergy when the forces of racism, communalism, caste-ism, etc, insist on dividing us more and more world over.

(The writer is a seasoned poet)