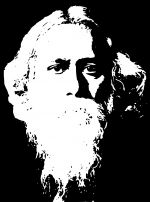 from Sonnet Mondal (a poet from Tagore’s land)

Born and brought up in the land of Bengal, Tagore has been much more than a bard to me. Starting from text books to festivals and from recitations to songs he was everywhere. I invoke the words of W.B. Yeats, who in his introduction to Gitanjali wrote “these lyrics display in their thought a world I have dreamed of all my life long.” This very line occupied my muses for years - as how can a poet with an entirely diverse backcloth write something that is a dream-world for another poet living in another corner of the globe - especially when the superiority of imagination of the Irish poet was without a shred of doubt. The fact was Tagore was a voice of the world.

The unmatched narrative, insightful philosophical exegesis and fine lyrical quality in Tagore’s poems rendered them a place that could be a dream destination for any individual’s mind. For many people Tagore is as imperative as a metaphor in daily life. We are aware how often words fail us in acute situations and how we employ metaphors to sustain the stream of expressions. Rabindranath Tagore’s verses serve as metaphors in the daily life of many folks from his land.

I remember, like most other school going students, I was never in love with text books and I never explored any possibilities of being a Tagore aficionado. But, years after I penned a poem dedicated to Tagore in 2011 which tells - about how his creative genius seems to breathe alive every time I try to plough through his verses and how his varied & vast muses cover up many aspects of my life.

A year has gone; I have told my companion

She would act as a dry leaf chided by

sizzling sunrays and pep up by twilight

to fall in his love yet again. Respect

loomed as a mirage deserting my love

for Tagore into the waste bin as my

own lady untied herself to his poems.

One morning I burnt Tagore’s books and tore off

the rest and my girlfriend still smiled for she

knew, it will be me now reciting Tagore’s

poems to release all that I have learnt from

childhood with her peaceful head in my lap.

Tagore, won’t you ever quit from our life?