The Ars Poetica International Poetry Festival was formed only a year ago. However, after last year’s success, the Ars Poetica civic association, which stands behind the festival, decided to muster up all its courage and significantly expand the festival. The 2nd year of the festival is branching out into screenings of films, which are thematically connected to poetry, as well as a multimedia dance project and a theatre performance. 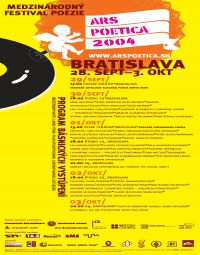 The atmosphere of the poetry evenings will also be complemented by jazz concerts. The 2004 Ars Poetica Festival takes place from September 28 to October 3 at Studio No. 12 at the Mladosť film theatre, as well as the cinema auditorium of the Slovak National Gallery, the A4 cultural center, theatre club Zrkadlový háj, the Polish institute and the Czech center. Poetry evenings will present 34 authors from 21 world countries accompanied by the VJ John Šicka, as well as several jazz ensembles from Belgium, Slovenia and Austria. The authors will perform in their original language and they will be joined by actors performing the Slovak version.

Poetry will be read by Táňa Pauhofová, Roman Luknár, Matej Landl and Marek Geišberg. The dramaturgy of the evenings has mesmerized last year's audiences with its spontaneous atmosphere and the open contact between the authors and the audience. This year, Slovak poetry will be represented by the poets Ivan Štrpka, Mila Haugová, Michal Habaj and Katarína Kucbelová. Experimental forms of art have found their way into this year's program: the audience will have a chance to witness sonic poetry presented by the Dutch poet Jaap Blonk. Poetry evenings will take place on September 30 and October 1 and 2 at Studio No. 12 on Jakubovo námestie, starting at 6pm. Poetry program includes a matinee titled Contemporary Visegrád Poetry, which takes place in the Czech centre on October 1 at 3pm.

For many of the poets, the festival will be their first opportunity at a live performance in Slovakia. The Ars Poetica publishing house is concurrently releasing a multilingual anthology with poetry translations and bios of the authors. The market will thus witness the birth of another extensive selection, which will introduce Slovak readers to a whole spectrum of contemporary poets from Europe and beyond. The Ars Poetica Festival will open its gates on September 29 at Zrkadlový háj, starting with a premiere of the Slovak and British multi-genre dance performance Love in Bilingual Motion, which is being created specifically for our festival in cooperation with the British Council. The choreography from the mind of a leading British artist Matthew Normal, which is based on the poetry of four British and five Slovak authors, includes six Slovak dancers. The cinematic section titled 2004 Ars Poetica Film taking place at the film theatres Mladosť, Múzeum, Slovak National Gallery, A4 and Studio No. 12, will present around two dozen full-length films, 50 documentaries and several experimental and animated projects. It is here that audiences will have a chance to witness the Irish film My Left Foot, the Italian film A Scandalous Journey depicting the life of the Italian poet Sibilla Aleramo, the British film Wilde or the Polish film Wojaczek, whose main protagonist, the well-known Polish poet Krzysztof Siwczyk, will appear at the festival.

The Slovak section will include an in-memoriam short documentary about the poet Ivan Laučík. We want to especially highlight Peter Repka's personal recording of the meeting between Allen Ginsberg and the Slovak group of poets called Lonely Runners, all with the patina of an 8mm film. The screening will be presented by Ivan Štrpka. Thanks to its multi-genre tone, the festival is hoping to bring poetry to a wider audience and establish itself firmly on the map of cultural events in Bratislava. 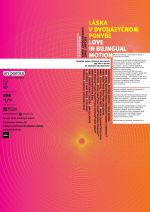 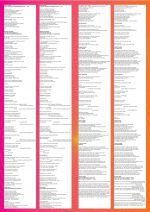