On October 11, A4 and the Lumière Film Theatre will witness the beginning of the 11th International Poetry Festival Ars Poetica 2013. Being a multi-genre event one of its kind in central Europe, it will once again merge contemporary world poetry with several genres of art. Festival visitors can look forward to a wide spectrum of poetics and languages, which are less well-known around these parts. Poetry will be read in Turkish, Georgian or even the Marathi language. The biggest draw will surely be the presence of several prominent personalities of contemporary world avant-garde, such as Gerhard Falkner and Hans Thill from Germany, Louis Armand from Australia, the digital experimenter Heike Fiedler from Geneva or the Finland-born Helena Sinervo currently residing in Berlin.

The festival will present works by 25 poets from 18 countries. Their poetry in an original translation will be read by well-known Slovak actors, Lucia Hurajová and Ľubo Bukový, and accompanied by the VJ Zdeno Hlinka. The magic of poetry will come to life in a multi-genre mélange of movement, sound and visuals during the performances of two contemporary and predominantly Slovak projects: Skúmanie javov (Scrutiny of the Phenomena) and Debody.

Slovak poetry will be represented by authors of several generations with several cultural experiences. Erik Šimšík's experimental poetry will represent the youngest generation. The established enfant terrible, Agda Bavi Pain, will present his new work and performance, while probably the most prominent Ruthenian poet Juraj Charitun will lead the audience into a world soaked in the power of archetypes.

Musical treats at the festival include the performances of the Polish ensemble Hipiersonik, the Czech legend Skrytý půvab byrokracie or live sets by the Slovak performer Stroon. 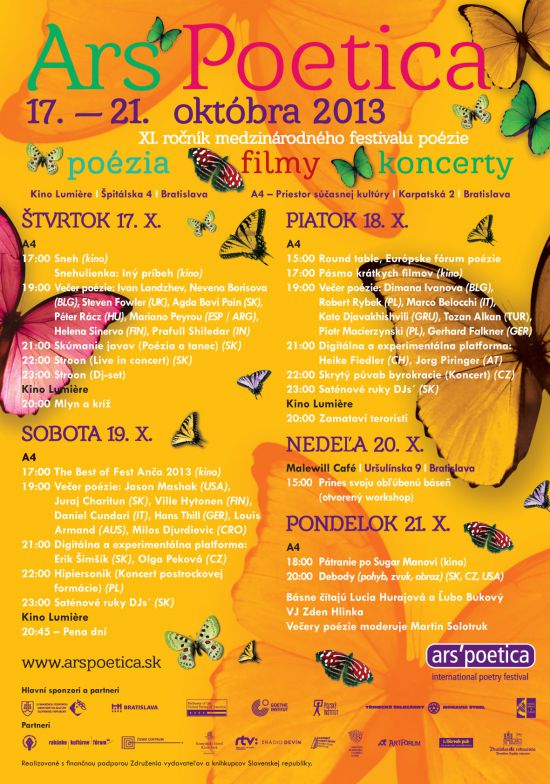